Michael Parsons has given — yes, GIVEN — us a couple of his pieces from the late 1990s, with the idea that they should be taken up by as many people as possible. The first piece we’ve got is a pdf of a verbal piece called Pentachordal Melody. It’s really cool: the score reminds us of some of the pieces in Samuel Beckett’s systemic novel Watt.

For those of you who don’t know Michael Parsons, he’s one of the three founders of the Scratch Orchestra, and a major force in British experimental music.

To get this piece, go here — http://www.experimentalmusic.co.uk/emc/Freebies.html — and follow the instructions. It will be emailed to you.

And even better yet, we’ve got another one coming as well….

We’ve been spoiling you with good video. How about something quite different? Here’s how not to perform an indeterminate verbal piece, supposedly Chris Hobbs’s 1967 classic Voicepiece, but coming out as something much noisier. We bring this to you as a cautionary tale: Kids! Don’t drink and perform experimental music! Stay away from YouTube if you do!

Compare this with the score (click thumbnail to read): 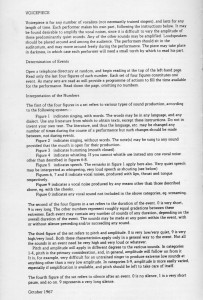 What is very odd indeed is the use of the conducted beat. But we like the hats and the Hirst-dotty shower curtain.

Daniel Varela sent us a link to a video on Llorenç Barber, a Spanish composer who improvises with some of the nicest-sounding bells you’d hope to hear: