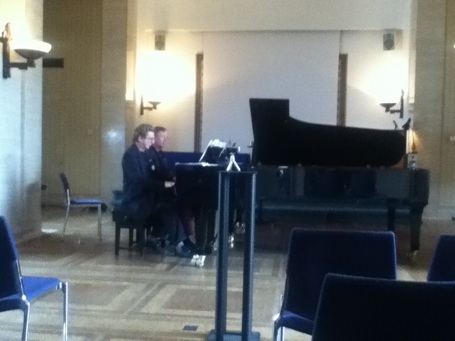 On 18 June 2013, Christopher Hobbs and Dave Smith gave a performance of music for piano duo and piano four-hands at the Institute for Musical Research conference, With Four Hands, at Senate House, University of London. We’ve provided a recording of the event, minus some introductions, but otherwise as it happens. There’s some pieces that you might have heard before and are in the two-piano repertoire, but others, much rarer, that have not been heard in decades. All the pieces are complete, bar Hobbs’ The Remorseless Lamb, which is a five-minute extract for the purposes of the conference.

Michael Parsons was born in 1938. Co-founder, with Cornelius Cardew and Howard Skempton of the Scratch Orchestra he has been closely associated with visual artists of the Systems group. Like Skempton, with whom he has worked as a duo, his music is characterized by an economical use of material and clarity of structure.

Since 1956, John White has composed a considerable amount for the concert platform, dance and theatre productions, electronic media and experimental ensembles that he has initiated. His works are written in a wide range of styles and include 175 piano sonatas and much for piano duet and 2 pianos. He is Head of Music at the Drama Centre, London.

Dave Smith read music at Magdalene College, Cambridge in the late 1960s, joined the Scratch Orchestra and performed in various composer/performer groups in the 1970s. These included a keyboard duo with John Lewis as well as later groups with Parsons, Skempton, White and Gavin Bryars. Much of his own music since the mid-1980s is for solo piano. He teaches at the University of Hertfordshire.

Christopher Hobbs studied with Cornelius Cardew at the Royal Academy of Music. Like Smith, he has been a member of various groups including the Scratch Orchestra, AMM, and the PTO and has written a large variety of music for many instrumental combinations. As a performer he has also been associated with the music of Erik Satie. Most of his recent music is computer-based, using number systems derived from Sudoku puzzles. He teaches at Coventry University.