John Luther Adams, whose music has been associated with the landscape and environment of Alaska since the mid-1970s, has used the term “sonic geography” to describe “a region that lies somewhere between place and culture, between human imagination and the world around us. [in Winter Music: Composing the North (Middleton, CT: Wesleyan University Press, 1004, p. 24]”. Adams’ The Place Where You Go to Listen (2008) is an installation in Fairbanks, Alaska, in which the visitor is immersed in the lights and feeling of the Northern environment, which move according to the time of day. Adams has added sound based on harmonic overtones —one, the Day Choir, and the other, the Night Choir —moving from one set of harmonics and added pulses to another with changes in light and appearance of the moon.

I was thinking about manifestations of light, activity and movement whilst viewing one of the best recent examples of sonic geography: Jamie Crofts’ project, 5 Diurnes: The Brayford Pool (Lincoln) by Day, which he launched at St Mary le Wigford, in Lincoln of 6 October 2016. I attended the second presentation of the project, at the Friends’ Meeting House, Lincoln, last Sunday, 16 October. Where composers since Field have focused on the meditative nature of night in the genre of Nocturnes (which Crofts has also done previously), and Adams seems to have balanced between day and night as one follows the other, Crofts has invented his own genre, the “diurne” in 2006. Diurnes are to day as nocturnes are to night: meditations on daytime experience. Diurnes, as Crofts explains in his notes for the piano score, are set for piano and spoken voice.

The Friends’ meeting house is a Grade II-listed building in Lincoln, itself a part of Lincoln life and history. The exhibition occurred in a secondary, Victorian, meeting room to the main 16th C. hall, and was set up with a recording of the piano part and spoken texts. The uncluttered room allowed a clear focus on the Diurnes and, perhaps, the internal pictures that the musical and verbal narrative called to the mind of the listener.

These five Diurnes focus on the Brayford Pool. This lake was used as a port by the Romans, who cut the Fosse Dyke from the River Trent at Torksey to Lincoln at the Brayford Pool, and to the River Witham, and was maintained for shipping, with improvements made in the 12th and 17th centuries. The Pool was used as an inland port as the Industrial Revolution brought manufacturing to Lincoln via the navigation canal, but as industry declined in the 20th century, the waterfront gradually moved to recreation, with one side occupied by the university, and the manufacturing giving way to number of restaurants and other entertainment businesses. The Pool is known for its resident population of swans and for an island, crowned by a weeping willow tree, which has both an obscure origin and attendant myths surrounding it.

The texts for the first, fourth and fifth Diurnes were based on a survey conducted in 2013, in which people in Lincoln were asked to complete the statement, “What I like most about the Brayford Pool is…”. Diurnes 2 and 3 were based on an article in the Lincolnshire Echo newspaper in 2010 about the Brayford Pool and its mysteries (“Is a long-forgotten secret buried beneath the island in the Brayford Pool?“, Lincolnshire Echo, 21 July 2010). Diurne 2 is distinctive in that the words (a kind of fantasy in which the protagonist wades to the island) are by Thomas Darby, while the text for the other Diurnes are written by Jim Simm (Crofts’ pseudonym). Diurne 3 poses questions arising from the newspaper article.

As Crofts told us in his rather illuminating talk after the last iteration of the 5 Diurnes, his musical scheme is based harmonically on “octonic” scales, a subset of the octatonic scales favoured by Messiaen and other composers, including John White. Like White, Crofts is interested in the music of Erik Satie, and opened his talk by showing us facsimiles of Satie’s working notes, in which he would line out bars before filling them (so that each bar was equal), set a rhythm-only system for the vocal melody (Christopher Hobbs wondered whether this was a reason that Satie’s vocal music contains so few melismas), and then filled the systems below within the grid just made. He also showed the score to Morton Feldman’s For Bunita Marcus (1985). Feldman structured his score in a kind of grid of even bars (like Satie), but then filled those bars with events in different meters and lengths (for more on the construction of this piece, see Sebastian Claren’s notes to Lenio Liatso’s recording on God Records, on Chris Villiar’s always-useful cnvill.net Feldman archive).

Crofts laid out his Diurnes in a similar manner. Rhythmic and harmonic decisions for the piano part of the 5 Diurnes were made using gaming dice. This resulted in certain core rhythms and a texture consisting of dyads to six-note chords. While Diurnes 1, 3, and 5 remain solidly in a single meter, Diurnes 2 and 4 change meter (all using the lower number 16). Diurne 1 uses, or example short phrases of this material alternated with the spoken text. Diurnes 2 and 3 bring in some processing for the voices.

The installation of recorded music and voice was broadcast from one source at the Friends House, so it was directional and demanded focus on that part of the room, but it was not a traditional concert. There was, to the side, an exhibit of the materials associated with the project: programmes, scores, and a guest book, as people were encouraged to come and go as they pleased. The score and text books are exquisitely laid out and printed. The piano part is a complete work, set in common-practice notation for performance. But the text book contains not only the text for each Diurne, but also appendices containing information, instructions, and encouragement for making unique performance versions of Diurnes 1, 4, and 5. The five Diurnes thus lie as much within the spirit of experimental indeterminacy as their fixed content lies with chance and with postminimalism. The Brayford Pool (Lincoln) by Day is an excellent, and very English, work of sonic geography. Its future performances should add richness to the piece and its perception.

Note: A free ebook version of the text book is available here, with more promised on his SOUNDkiosk page. And the Bandcamp page is here. 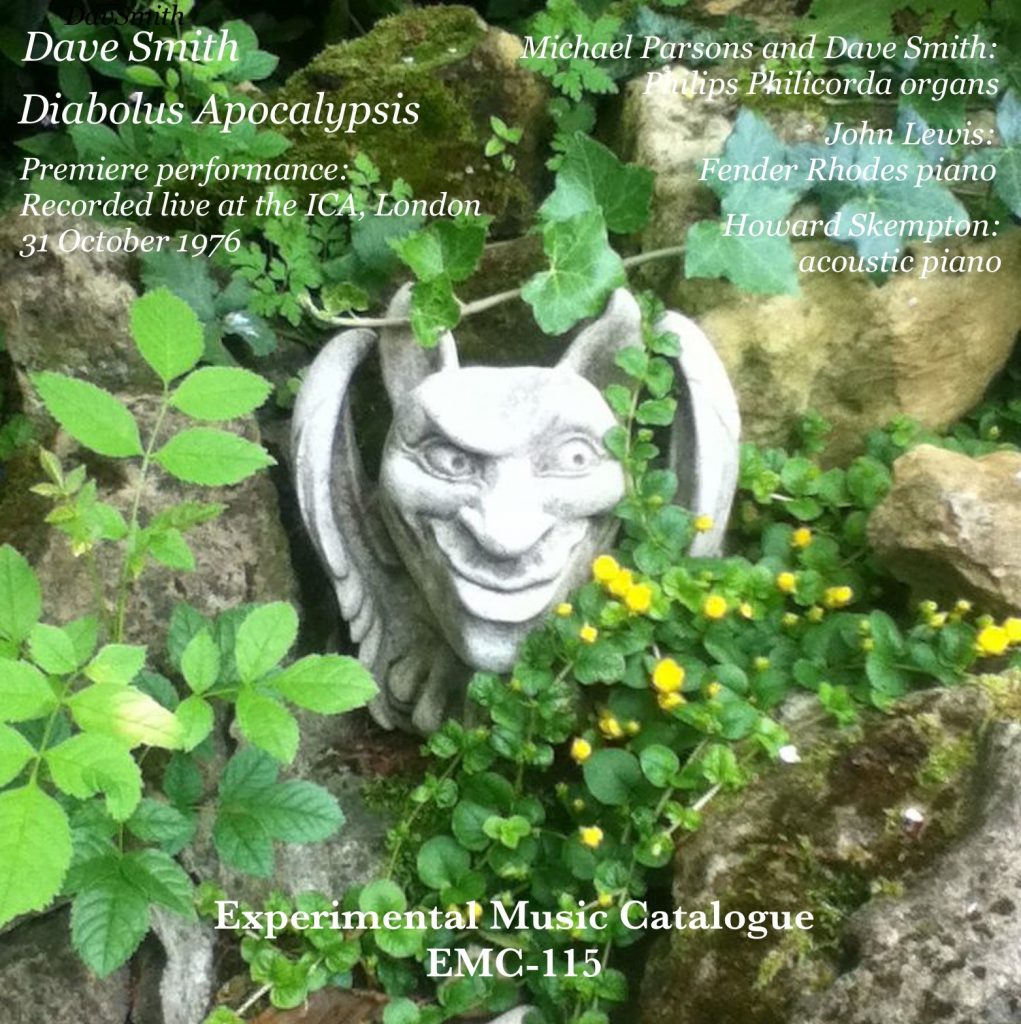 “The piano itself was a legless affair resident in the ICA: I remember it was perched on metal beer barrels. It of course had no pedals which was fine for the piece. Howard managed to bust a string part of the way in . . .”

This is from the same ICA concert as Smith’s Moderation in Nothing, EMC-113, which we uploaded a while back. Like Moderation in Nothing, we’re releasing this as an EP single (23 minutes). The performers here form the entire group of composers whose music was on this concert — a rare collaboration of two of the great English systems music duos of that time, Parsons/Skempton, and Smith/Lewis (the other duo being Hobbs/White). This single is an archival gem, and as such has some limited distortion from the shock of the instruments on the live recording. You can listen online for a limited time for free, and can own it for £3 or over (a gift to help us continue to keep the EMC going and 10% to the composer in royalties). A purchase comes with a pdf download of a facsimile of the concert programme and a flyer for the series.

Here is the link: http://bandcamp.experimentalmusic.co.uk/album/diabolus-apocalypsis

The devil you say? Oh, yes, the devil we say!

Hi there. We’ve just updated our whole site, including Jems, the catalogue, and our lovely splashpage, featuring Cornelius Cardew, Christian Wolff, and the EMC founder Christopher Hobbs, rehearsing in London in 1968, the year that Chris founded the EMC (yes, we know the strapline is ‘experimental music since 1969″, but that’s my fault in 1999…).

You’ve probably got here through that splashpage, but if you came through our old one, here it is: http://www.experimentalmusic.co.uk/emc/index.html

And have a look through it. We’re going to expand all the information on composers, performers, and others associated with the EMC, and there will be much more good stuff to read. And next up, a new Bandcamp EP of a great archival performance of a piece by Dave Smith. So…stay tuned!