Carole Finer contacted us to share news that the show tribute to Alec Hill, Promenade Theatre Orchestra and Scratch Orchestra member, composer and clarinettist, is now available on Soundcloud. There are some lovely moments in this rather funny and very heartfelt tribute: Alec Hill’s whistle solo on the performance of Paragraph 1 (and 2) of Cornelius Cardew’s The Great Learning at the BBC Proms concert at the Albert Hall in 1972; the PTO playing Hill’s Large Change Machine (1972), and other pieces. Here’s where you can find it: https://soundcloud.com/resonance-fm/14-00-00-sound-out-320kbps-4?utm_source=soundcloud&utm_campaign=share&utm_medium=facebook

From Mike Hurley, a pair of Fizzles:

Both at The Lamp Tavern, Barford St, B5 6AH.

Tuesday 4th March at 8:30pm
Chicago improvisers Rempis and Daisy team up with Midlands based musicians. 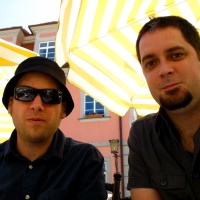 Just had word that this Friday, 21 February, at 2 pm (London time), on her great regular show, Sound Out, on Resonance FM, Carole Finer will be focusing on the former Scratch Orchestra and PTO performer Alec Hill, who tragically died last October. Guests will include John White, Hugh Shrapnel, and Christopher Hobbs — the other members of the legendary group the Promenade Theatre Orchestra — plus John Tilbury and Bryn Harris, who, with White, Shrapnel, and Hobbs, were in the Scratch Orchestra with Hill. This will be a landmark occasion, and a chance to hear from some of the most important figures in late-1960s and early 1970s experimental music and minimalism. They do not, at the time of this writing, have any details up on Resonance FM’s site, but here’s the link to the schedule: http://resonancefm.com/schedule . Resonance FM is a non-profit alternative music station run by the London Musicians’ Collective, with a large internet presence as well as their London-only FM broadcasts. If you have one thing to listen to this week, this is a good candidate!

Update: the tribute to Alec was affectionate, featuring John Tilbury, Bryn Harris, Carole Finer, and the surviving members of the PTO: John White, Christopher Hobbs, and Hugh Shrapnel. The broadcast will be repeated on Monday, 24 February, at 8 am GMT on Resonance.