More free improvisation fun from our friends at Fizzle, Birmingham:

Centrifuge brings an exciting collection improvising musicians based in North and Midlands together in Birmingham. The musicians, with a range of different musical practices, will combine in various small groupings to deliver a program of free improvisations in music.

Featuring the following and more or less:

Phil Morton notes: A tasty line up, good instrumentation, and excellent to see the “Phil’s” are well respresented.

Big Bryars concert coming up next month in London:

On Friday, as part of the Frontiers Festival of New Music, Simon Peacock, his Surge Orchestra, plus students of Birmingham Conservatoire (as the Thallein Ensemble) played Terry Riley’s In C (1964). This performance was held in the absolutely gorgeous setting of the rotunda of the new Library of Birmingham. The place is worth visiting just for the view: blue-lit escalators and a high-level people mover, black metal framework. Add to that a whole lot of books and exhibits and a pretty good cappuccino at the in-house café, and it’s a lovely place to visit. But we were here for Terry Riley.

Chris Hobbs, who had directed the first British performance of In C in London in 1970, introduced this performance. His introduction (the first part of which was cut off) appears here:

Hobbs had been advertised as performing with the group and had rehearsed with them once rather late in the schedule. But he decided that they had already fixed their performance and that it would be better for him to let them perform it themselves. The ensemble of students was especially excellent and enthusiastic. They would have played a classic version of In C very well indeed. Such a version would have consisted of the score: 53 little motives that are repeated ad libitum by each player, who moves through the material at her/his own pace. The resulting counterpoint of voices has made In C stand out as the first ever piece using repetitive process minimalism. Almost all performances are kept together by a pulse of repeated high Cs in octaves throughout the piece (usually on piano or mallet instrument). Once all performers reach the final repeated motive, they can end on a signal by the conductor.

I had come expecting the classic version, given that it was an anniversary event. At the very most, I had expected the group to follow the main structure and motif to motif procedure, adding occasional improvised melodic ornaments. Riley himself has added such material. However, the improvisation — or what might have been directed or newly composed material — was far more extreme than I had heard before. The group, rather bravely, rejected the C pulse, choosing to keep time themselves. Here they are, after an opening improvisatory passage, including a spoken monologue by Peacock, beginning the first real Riley portion of the performance:

The lack of a pulse made the tempo in the Riley music slow down somewhat, but not as much as some previous performances. But what was unusual was the decision by the director, Peacock, to intersperse sections of the Riley with other passages, most of which did not have the driving pulse of In C. These were described as improvisation. Peacock chose to speak some text through a microphone, both at the beginning, before Riley’s first notes, and in an improvised passage just before the final chunk of Riley’s music. This text, which was blurred and unintelligible, could have been Riley’s own prose, but I suspect was Peacock’s own. This clip has the last of Peacock’s narration (which seems to have had some sea imagery, though I am not sure) and the improvised music:

Now, this is a report of what happened, not a review, so I’ll only share a bit more of what I observed. I was not at the rehearsals, so the following is just an educated guess. I don’t think what they played was free improvisation and extemporisation of the original piece. Usually in free improvisation, there are ‘fuzzy edges’ in which a performer initiates a new texture, melody, or character to be taken up by the rest. But for me, this was too directly sectional: of Peacock, Riley, Peacock, Riley, etc. Some of the Peacock band sections had a little Riley in it. Most, like the excerpt above, had little of the incessant pulse of the original piece. The audience, some of whom had come specifically to hear In C, some of whom were library visitors who happened across it, seemed to have a different physical reaction to the Riley sections than the Peacock ones. Of course, this was due to the rock-like propulsion of Riley, compared to the more amorphous Peacock sections.

Chris Hobbs has said nothing more about this performance than I’ve indicated above, so I have only my experience as a listener to go on. And that leads me to a question. Of course, there’s nothing wrong in revising or paraphrasing a piece, but when a composer does so, he or she usually calls it ‘Paraphrase on’ or ‘Meditation on’ the original composer’s piece by the paraphrasing composer. This concert was advertised as Terry Riley’s In C and was mounted as a fiftieth anniversary of Riley’s creation. If this piece is so important as to be memorialised with a performance at a large festival of American and British music, then why change it?

Here are some pictures from John White’s birthday bash at Charlie Wright’s International Bar and Jazz Emporium. These are just tasters of some really cool happenings at the show: 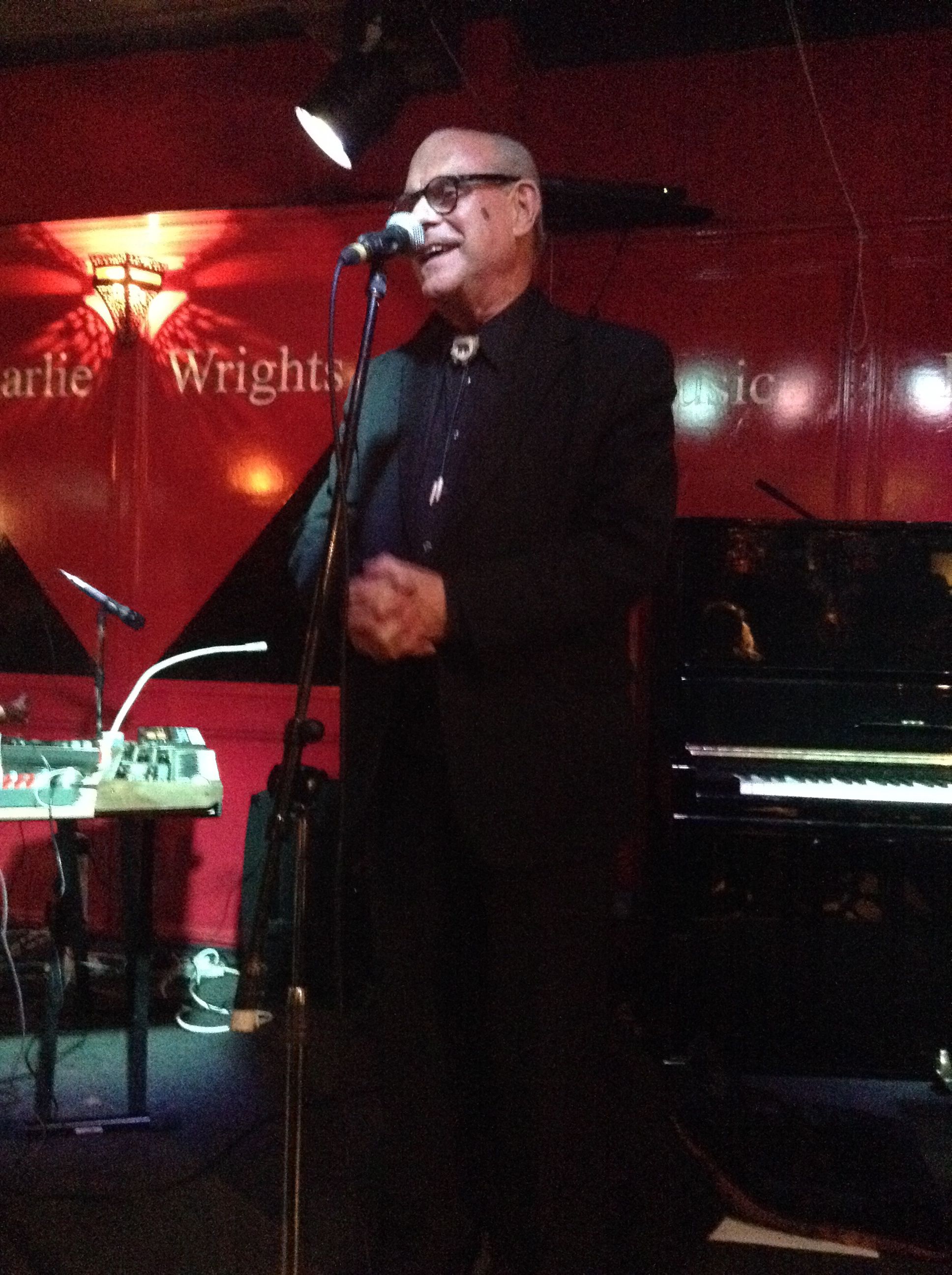 2) John Tilbury announcing his set of two sonatas by John White, whilst wearing the most amazing sequinned waistcoat: 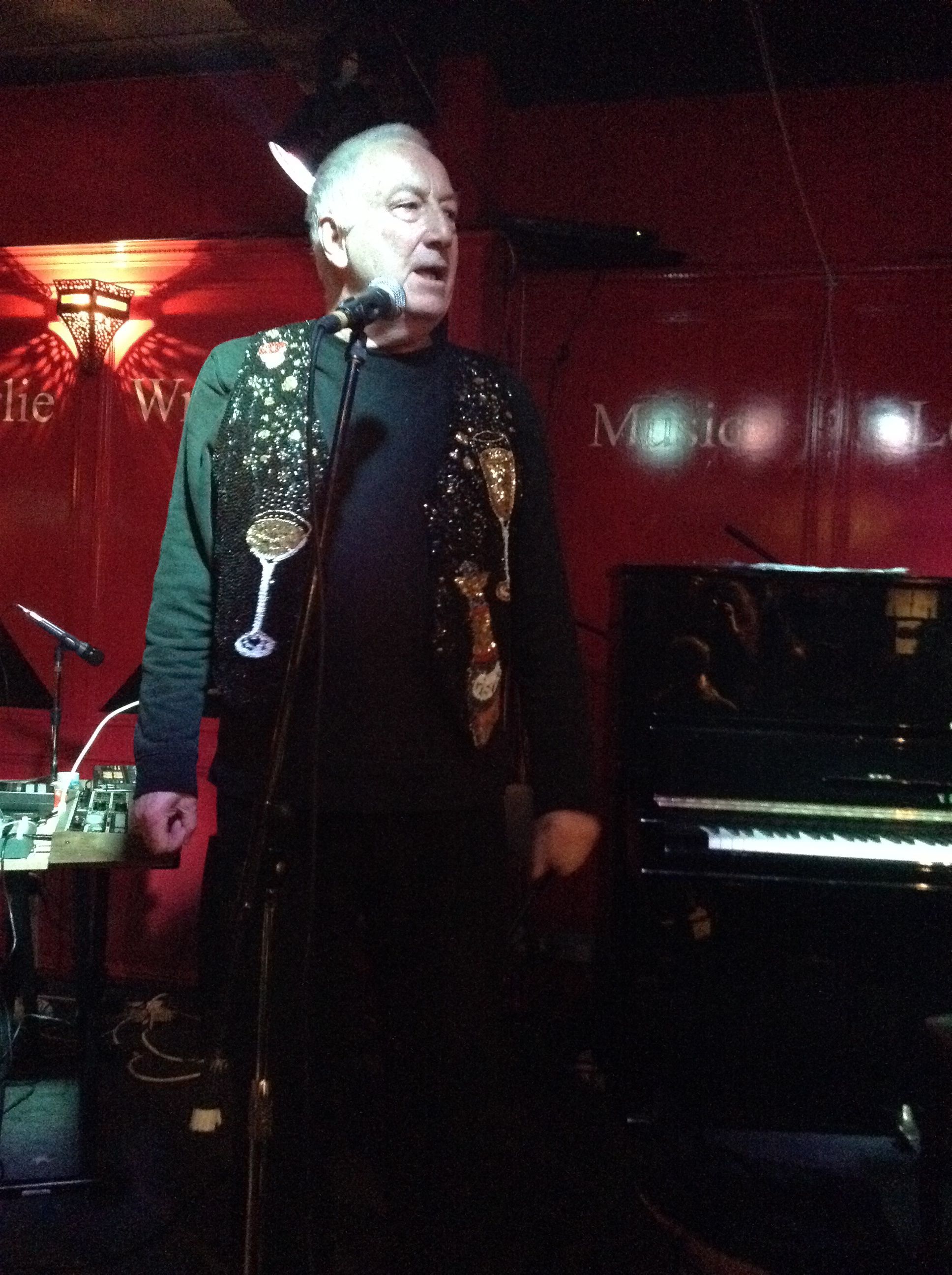 3) Michael Parsons playing a piece about what Erik Satie would sound like if he had taken lessons with Arnold Schoenberg instead of Vincent d’Indy. 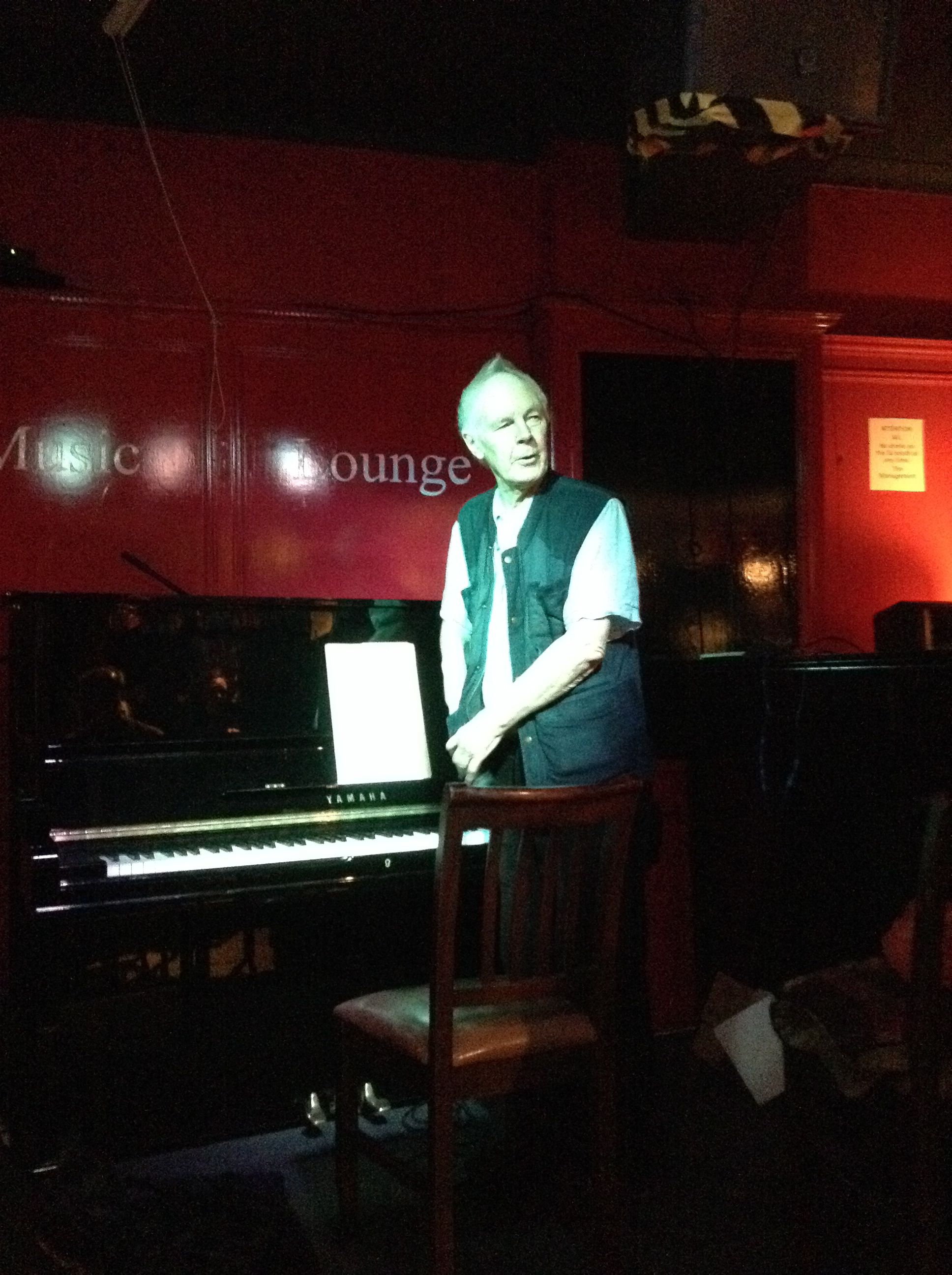 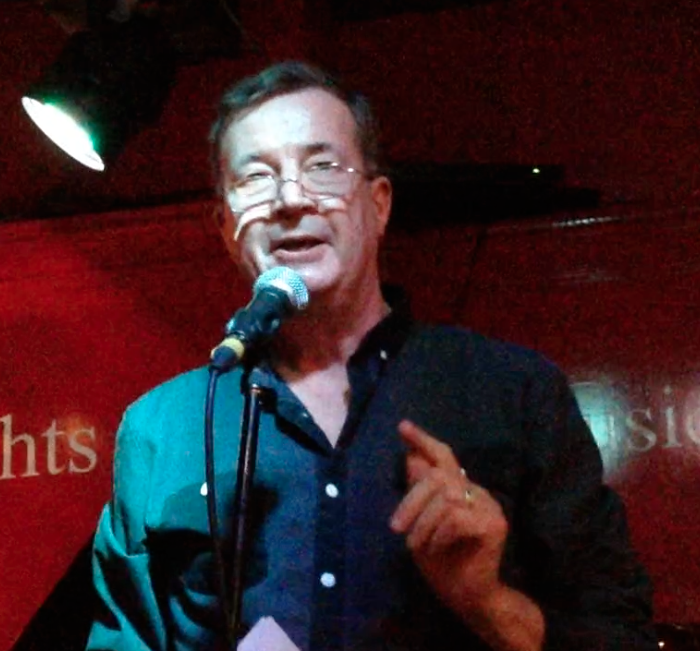 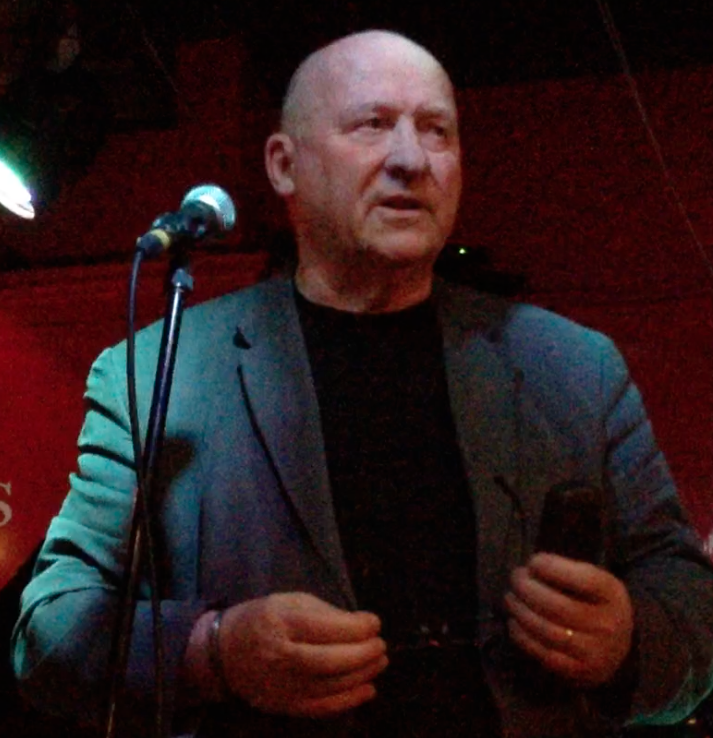 That’s just a taster. We shall come back with more on this event. It was a wonderful time. Good music, great fun.

We had been meaning to put this announcement up for all to attend, but we understand that it sold out almost immediately. This is the launch of Dave Smith’s book, The A-Z of John White, sponsored by the Intitutuum Pataphysicum Londiniense, Sunday, 6 April, at Charlie Wright’s International Bar and Jazz Lounge, in London from 4 pm. John White is also 78 years old this week, so the theme of the activities — a lot of performances! — is 78.

White, who is pretty much the ‘Godfatha’ of British Minimalism, has created Machines, systems, electronic symphonies and his own diary-like series of piano sonatas (near 200 these days — it’s hard to keep up with him!) over the years, as well as founding some of the great British groups: the Promenade Theatre Orchestra, Hobbs-White Duo, The Garden Furniture Ensemble, Farewell Symphony Orchestra, Live Batts!!, among others. White’s music (as you might guess from the band titles) is inventive and delightful. Dave’s book is a compendium of all things White, including types of music, performances, and reviews. Important stuff. Here’s the announcement: we’ll let you know how to get the book and hopefully send news of what happened at this event next week. (the pictures are those of all sorts of guys named John White). 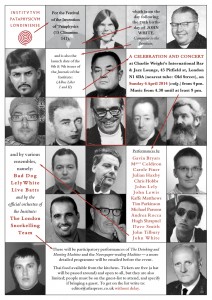 For those of you in Birmingham, the Frontiers Festival has a whole lot of music from Downtown New York and Britain — and from Texas and California (though now based in New York), Pauline Oliveros. We haven’t shared this before because the festival web site is clumsy to load and uninformative once there, with a number of events that are absent or hard to find.

But here’s an offering: a free lunchtime concert celebrating the fiftieth anniversary of Terry Riley’s In C, in the rotunda of the new Birmingham Library, on Friday, 4 April from 12.15–1.15. It’s directed by Simon Peacock, with the Thallein Ensemble and Surge, with special guest star Christopher Hobbs. Hobbs is there because he mounted the first performance of In C in Britain. The story, quite cute, is here: http://www.frontiersmusic.org/events/event/terry-rileys-in-c/