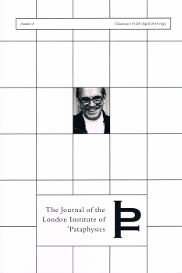 The Promenade Theatre Orchestra was an ensemble of four members (Alec Hill, Christopher Hobbs, Hugh Shrapnel and John White) who performed regularly from 1970-1972, mostly on a combination of instruments including toy pianos and reed organs. As a memorial to Hill EMC are releasing four of his works, three for the PTO and one other instrumental piece. The works are Small Change Machine and Large Change Machine for four toy pianos (the latter can be heard on the EMC’s CD PTO:The Orangery), Carol for four reed organs and Annable’s London Surprise for six or seven sustaining instruments. All four use systemic procedures (change-ringing patterns in all except Carol) and present a fascinating translation of those procedures into entertaining and sometimes exciting music. The scores are available in pdf. format and are priced at £8 for the set.

These four pieces feature Hill’s use of campanology and other early systems procedures. They have been computer-set and carefully edited by Christopher Hobbs (with help from PTO member Hugh Shrapnel) from Alec Hill’s manuscripts, and come with editorial and performing notes. As well as the information on the Orangery concert, for a short obituary on Alec Hill, with more on his compositions and work in the PTO, see Virginia Anderson’s post on the EMC Blog. 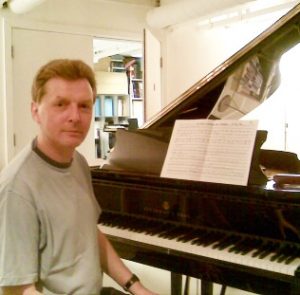 We’re absolutely, positively thrilled to announce a new Bandcamp issue from the EMC. Dave Smith has allowed us to release two tracks. The first, Moderation in Nothing (1976, EMC-113), is a classic archive recording, featuring members of two of the great British systems music duos of the 1970s, playing together as a quartet: Howard Skempton on sopranino recorder and electric piano; Dave Smith on ocarina and guitar; Michael Parsons, on electric organ and cymbals; and on wine glasses, bell and voice. It appears in its premiere recording at the Institute of Contemporary Arts, London, 31 October 1976. This extended-play track (over 23 minutes!) costs £3 (although you can give more) on our Bandcamp site.

The other track, Frivolous and Vexatious (2002, revised 2014; EMC-114) was first written for Dave Smith’s 8th Piano Concert and is dedicated to the composer and former Garden Furniture Music member Ben Mason. It is heard here in the premiere of the revised version, at Schott’s recital room, London, 25 July 2014. This even-more-extended-play track (over 34 minutes!) costs £3 (although you can give more) on our Bandcamp site.

So whether you’re frivolous, vexatious, or believe in moderation in nothing, it’s worth checking out these tracks for a free listen, and perhaps buy these goodies. We’ve migrated to a sleeker and more economical Bandcamp page just last week, but we still need support to keep this feature going. And for information, do check out Dave Smith’s composer page on this site for more information!

On Thursday, 8 September, we attended the first rehearsal of the East Midlands branch of CoMA (Contemporary Music for All) in preparation for what is going to be an exciting event, called “EMC²”, a special celebration of the Experimental Music Catalogue and its history. This event will happen March 2017 at De Montfort University, Leicester. Details will be announced soon, but the idea is so wonderful, I thought I’d give you a sneak peak.

CoMA is a nationwide organisation devoted to promoting contemporary music performance by musicians of all abilities. The East Midlands branch is conducted by the energetic and effervescent conductor Kieran O’Riordan. Here is a quick and short taster video of the group’s first rehearsal of Christopher Hobbs’ Friesian Cow (1969), a Word Piece that appears in the EMC Verbal Anthology. Like a lot of Hobbs’ pieces at the time, the Friesian Cow uses a found text (a guide to ideal Friesian cattle — as one member of CoMA called it, “Crufts for Cows”) to generate musical events. This first play is wonderful, and we’re looking forward to future rehearsals. There will be still pictures of this rehearsal on our Facebook page. And of course we’ll let you know here as things develop.

Besides revamping the EMC website, I have been researching a few projects — one short and nearly complete, the other very long. And it was in the research for the latter that I found myself carried away on a stream of linked subjects in a very pleasant manner.

Today I needed to look up basic data on the composer James Tenney (1934–2006). Although I had spoken to Tenney several times, it was only to answer the telephone at the composer Barney Childs’ house, hear, “Is Barney there? This is Jim Tenney”, and, being too shy to bother him, would hand the phone over to Barney immediately. I have a collection of Tenney’s Postal Pieces sent in his early years at CalArts (the early 1970s) to Childs. More about these pieces — classics in both mail art and music — can be found in a reproduction from Larry Polansky, “The Early Works of James Tenney”: VII Postal Pieces, in Peter Garland (ed.), Soundings Vol. 13: The Music of James Tenney (Santa Fe, New Mexico: Soundings Press, 1984). This reproduction of the first edition, in Soundings‘ typical typewritten style, was edited and expanded by Polansky for liner notes for a recording on New World Records, but the style of the original, and its reproduction of the pieces, is especially gratifying.

Tenney’s Wikipedia page, albeit a bit out-of-date, is full, with a link to an appreciation page on Kyle Gann’s excellent Postclassic blog, posted just after Tenney’s untimely death. There is also a link to recordings on UbuWeb (though the rights issues on this site are a bit unclear, as usual), beginning with the marvellous and influential tape piece Blue Suede. But here the Wikipedia article led me to another facet of Tenney’s work. He was not just a major electronic pioneer, nor a major composer in post-1960s indeterminate text and graphic notation, who stepped across the Uptown and Downtown New York City scenes with ease. He was also a pianist of note and a scholar of experimental music history. Here is Tenney performing the first two of Cage’s Sonatas and Interludes at the Schindler House in 2002, on the tenth anniversary of Cage’s death.

It is a ravishing setting, and a beautiful performance. It recalls James Pritchett’s Six Views of Sonatas and Interludes, which appears among the holdings of his site and blog, The Piano in My Life. Pritchett’s blog on Cage, Feldman, and others is well worth meandering down,* and it is definitely worth reading the “Six Views” article in connection with Tenney’s performance, meditating on the ways in which this particular performance exemplifies those views.

And now, having meandered from my original research, I must meander back to it.

* On a Facebook thread just today, the theorist Kevin Holm-Hudson cited Gann’s Postclassic and Pritchett’s The Piano in My Life as two of the best “public musicology” (meaning jargon-free and useful) websites.