Just last night those of us at the Experimental Music Catalogue heard some bad news. Alec Hill, a member of both the Scratch Orchestra and the Promenade Theatre Orchestra, has died. Hill attended John White’s weekly Sunday meetings at the Arts Lab, London, from 1969. These meetings resulted in the formation of the Promenade Theatre Orchestra. The PTO, a quartet including White, Hill, Christopher Hobbs and Hugh Shrapnel, created and performed some of the earliest British minimalism on toy pianos, reed organs, and their own secondary instruments: White on trombone and tuba, Hobbs, on bassoon, Shrapnel on oboe, and Hill on clarinet. The group reflected White’s interest in musical systems; it also reflected his wit and humour. The name, ‘Promenade Theatre Orchestra’, has a kind of Edwardian end-of-pier aura; its acronym, PTO, also stands for ‘please turn over’, a kind of schoolroom shorthand.

This was a time when most ‘great’ modern music aspired to serious consideration of great ideas, large displays of virtuosity, and a scientific rigour, and most composers wrote for large groups of professional ensembles in great halls, with the benefit of arts funding. On the other hand, the PTO wrote music in the early systems process style called Machines, but they played it as a part of their life, in weekly meetings before pub sessions. They performed on toy instruments with a patent air of good cheer and serene grace rather than in studied contemplation of serious matters. Hill, Hobbs, White, and Shrapnel were also members of the Scratch Orchestra, an ensemble, co-founded by Cornelius Cardew, which had a similar taste for anti-highbrow instruments, musical content, and performance style. However, the Scratch Orchestra was mainly a non-reading, improvisatory experimental anarchic collective; the PTO was a minimalist supergroup who played their toy pianos and reed organs literally to destruction. You can find out more about the PTO on the Experimental Music Catalogue website, which discusses their landmark concert at the Orangery, Holland Park, London in 1972: http://www.experimentalmusic.co.uk/emc/About_the_PTO.html .

If someone had marketed the PTO as a boy band, Alec Hill would have been ‘the smart one’.* He had a PhD in nuclear physics and worked as a scientist. The PTO was a composer-performer ensemble; Hill contributed to the PTO repertoire less frequently than Hobbs and White, but those few pieces are central to an understanding of PTO music. Hill employed his interest in campanology to create compositions with rigorous permutational systems, especially in two pieces for toy pianos, Small Change Machine and Large Change Machine (the ‘change’ in the titles is a pun on English ‘change’ ringing).

The PTO broke up on the Scratch Orchestra/PTO tour of Norway in 1973, as Hill and Hugh Shrapnel became interested in music with a greater political content. Although Hill did not work with the People’s Liberation Music and Progressive Cultural Association projects and protests for as long as Shrapnel, he can be heard playing bass clarinet on two tracks of Consciously, a compilation album of PLM and other groups associated with Cornelius Cardew’s late political concerns. You can find this album on the Musicnow website, here: http://www.musicnow.co.uk/plm/. Hill’s interest in grassroots musical activity, which had begun with his work in the Scratch Orchestra and his compositional interest in change ringing, continued. He founded the Cotswold Clarinet Choir in 1996, which has met weekly since then in Gloucester (http://cotswoldclarinetchoir.webs.com/ and Facebook: https://www.facebook.com/CotswoldClarinetChoir). He was also involved in Chinese traditional music and Chinese culture in his retirement. He married in 2009 and is survived by his wife and children.

The last appearance by all four members of the PTO occurred at the Conway Hall in 2001 on the twentieth anniversary of Cardew’s death. They played Cardew’s Octet ’61 for Jasper Johns, an indeterminate piece best known for having an event marked ‘out, away; something different’. The members of the PTO interpreted this event by standing, raising glasses of red wine, and declaiming, ‘To Cornelius!’ There had always been a slight hope that we’d see all members of the PTO together, this time playing the music they had created in the short, heady years from 1969–1973, but sadly, Hill’s death means that we’ll never see this line-up again.

I’m hoping that this blog post will begin a conversation. I probably chatted with Alec more about bass clarinets than the PTO, as he seemed to be much more involved in this kind of amateur music than any of the more ‘modern’ music that he did so well in his youth. Thus it would be useful to hear from others about Alec, the PTO and Scratch and any other memories that you may have. Just respond on this blog with comments, or on the Experimental Music Catalogue Facebook page (https://www.facebook.com/emcsystems). I thought you might like listening to this short clip of the PTO playing Hill’s Large Change Machine at the Orangery in 1972, perhaps with that glass of red wine in hand.

*White would have been ‘the funny, creative one’, Hobbs ‘the cute one’, and Shrapnel ‘the nice, sweet one’. That said, boy-band marketing is too limited as a characterisation of the group. All members of the PTO were smart, funny, creative, cute, nice, and sweet.

More from Mike about Fizzle and all things Birmingham:

Good news for Fizzle this Tuesday.

Benedict Taylor, Tom Jackson and Dom Lash will now be joined by Mark Sanders on drums/percussion.

COMING UP AT JAZZLINES: PAUL DUNMALL AT 60 and THE LANGSTON PROJECT

Jazzlines is celebrating Paul Dunmall’s birthday (which actually came earlier in the year) and his major contribution to music with a special concert at mac (Midlands Arts Centre, Cannon Hill Park) on Saturday 26th October at 8pm.  The concert will feature two aspects of Paul’s music, the improv. side and his compositional side.  The concert will start with an improvised set from the Realisation Trio, which features, as well as Paul, Nick Jurd on bass and Jim Bashfordon drums.  This is the group that made an excellent album earlier this year.  In the second set Paul will present the premiere of a composed work for a new sextet featuring Percy Pursglove on trumpet, Mike Fletcher on alto sax and flute, Paul on various instruments, Mike Hurley on piano, Chris Mapp on bass and Mark Sanders on drums.  Of course there will be plenty of room for improvisation within the compositions.

On Tuesday November 5th Jazzlines will be presenting at mac a new Ango French project developed with La Dynamo club in Pantin Paris and supported by Jazz Shuttle.  The music is the setting to music of certain poems written by Langston Hughes, the key writer in the Harlem Renaissance of the 1930s and 40s.  The music has been developed over five days of rehearsal by Hasse Poulsen guitar, Luc Ex bass guitar, Mark Sanders drums and Elaine Mitchener vocals. Tony Dudley-Evans attended the premiere at La Dynamo last week and reports that the music is very strong moving from poignant songs to very exciting improv., but always with a wonderful groove.  Strongly recommended.

Mike Hurley sends word of the newest Fizzle show. If you’re in the area, why not drop in and then go for a curry? Good beer at the Lamp, too.

For those who are going to be somewhere near Long Beach, Bryan Pezzone, the go-to pianist for the lovely Cold Blue label, is performing some Cold Blue hits:

As the 4th International Conference of the Society for Musical Minimalism begins in Long Beach, those of us who can’t attend should have something to keep us entertained as well. Here’s a programme that the minimalist/systems composer Paul Epstein sent us a while back of a concert he played at the University of California, Berkeley, in 1959. The pieces are landmark ones, the players include some of the ‘megastars’ of early minimalism (click on the picture to see a bigger version). Thanks, Paul, for this, as always. This concert now appears among the EMC’s list of historical events we’re going to visit once time travel is worked out properly. We’re assuming the role of AN Other on Imaginary Landscapes No. 4 will be ours when it does. Do you have any time travel favourites? Let us know! 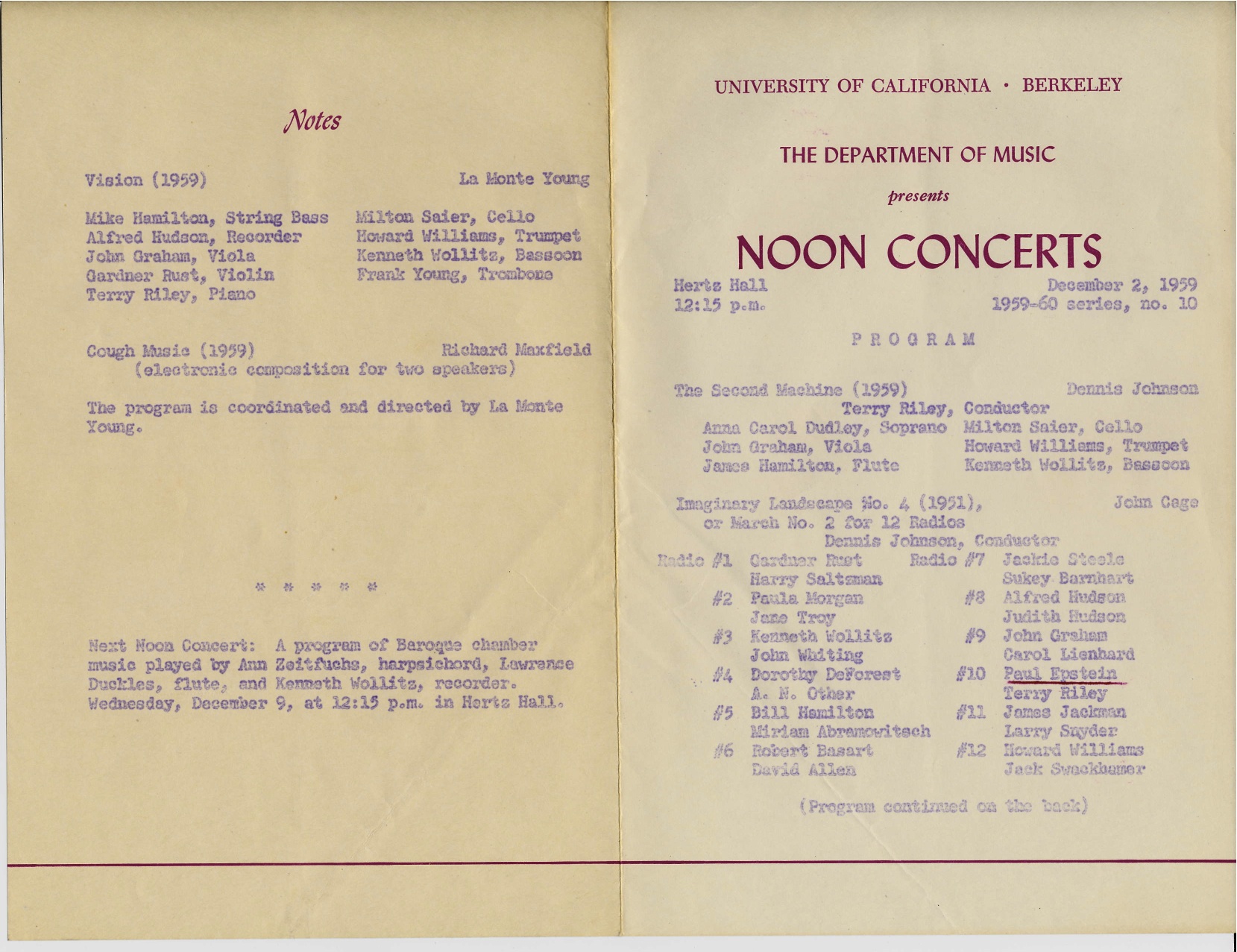