Here are some more items from the EMC archives. The two pictures are from a meeting of the Northwood New Music Society in 1967. The first picture shows Alan Cutts, viola, and Christopher Hobbs, piano. The second shows Hobbs (then 16) working on preparations inside the piano. What were Hobbs and Cutts playing? Was the duo picture of a different piece than the preparations picture? We’re not sure. 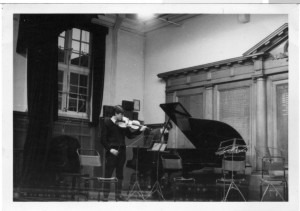 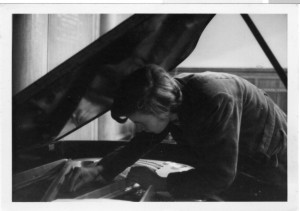 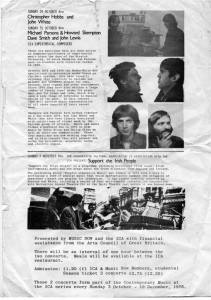 There will unfortunately be no Fizzle gig on the 24th September.

But no fear. Fizzle heartily recommends the following:

PAUL DUNMALL JOINS TOBY DELIUS AS A SPECIAL GUEST IN EXCLUSIVE BIRMINGHAM EVENT
20th September at Ort café.
Toby Delius is a British saxophonist who has spent most of his playing career abroad, initially in Germany and then Mexico before settling some years ago in Amsterdam.  There he is a key figure of the jazz and improvising scene playing most notably in the Instant Composers Pool that recently had a three-day residency at The Vortex in London.  Toby’s sound owes a lot to the great saxophonists from the 1930s onwards, notably Coleman Hawkins and Ben Webster, but his style is that of the 2000s.
Toby is touring UK with bass player, Olie Brice and in Birmingham Miles Levin on drums.  At the Birmingham gig, this Friday 20th September at Ort Cafe on the Moseley Road opposite Moseley Baths (500 – 506 Moseley Road, to be precise) at 9pm, they will be joined by Paul Dunmall, one of Europe’s finest improvisers on sax, clarinet and pipes.  This is exclusive to Birmingham and is a very exciting prospect, two great improvising saxophonists who respect the jazz tradition, but take it somewhere else.
For further information see an interview with the tour organiser Olie Brice at http://www.londonjazznews.com/2013/09/interviewpreview-olie-bricetobias.html

Here is the programme and the abstracts from the next conference on Music and Minimalism, October. If you’re in the area, there are some interesting people and papers:

sorry, whoever put it up on Dropbox has removed it. We’ll try to get something about it eventually.

Here’s a delightful video for the event, if you haven’t seen it. It’s from Mondays with Merce, part of the materials produced for the centenary. This (Episode 15) is a cracker, with contributions from Christian Wolff and Gordon Mumma, Cage performing 4’33”, and some amazing insights into dancing to electronic music from Merce Cunningham (it’s in the nerve, not the muscle, apparently). Beautiful and fun.

The Prepared Mind, with John Cage and David Tudor: http://www.mercecunningham.org/film-media/mondays-with-merce/episode-15-the-prepared-mind-john-cage-and-david-tudor/

In his useful PostClassic blog, Kyle Gann has taken up the question of whether today’s composers debate, or if they are too cool to do so. In the course of his blog entry, he talks about the fights of the 1980s between Uptown and Downtown, serial and minimal. It’s here: